DETROIT – General Motors Co. (NYSE: GM) Chairman and CEO Mary Barra revealed that the company will offer 30 all-electric models globally by mid-decade. Forty percent of the company’s U.S. entries will be battery electric vehicles by the end of 2025. Barra also announced an increase in GM’s financial commitment to EVs and AVs today to $27 billion through 2025 – up from the $20 billion planned before the onset of the COVID-19 pandemic.

“Climate change is real, and we want to be part of the solution by putting everyone in an electric vehicle,” said Barra. “We are transitioning to an all-electric portfolio from a position of strength and we’re focused on growth. We can accelerate our EV plans because we are rapidly building a competitive advantage in batteries, software, vehicle integration, manufacturing and customer experience.”

Ultium already represents a milestone achievement in electrification, with battery pack costs nearly 40 percent lower than those in the Chevrolet Bolt EV. Despite the pandemic, GM’s work on EVs accelerated during 2020.

Now, just eight months after the technology was first revealed, GM is projecting that second-generation Ultium packs, expected mid-decade, will cost 60 percent less than the batteries in use today with twice the energy density expected.

These second-generation cells will get closer to cost parity with gas-powered engines due to:

GM has completed hundreds of test cycles on the multi-layer prototypes of this next-generation Ultium cell chemistry. Production cells are expected by mid-decade.

The Ultium platform is flexible enough to accept new chemistry and even cell types, without redesigns to its architecture. Ultium batteries will be easy to service at the module level, which makes repair costs less expensive than having to replace the whole pack.

“GM’s EV development times are speeding up and costs are going down rapidly, so we expect our Ultium EV programs to be profitable from the first generation on,” said Parks. “It’s not just the cost and performance of our innovative EV components that will give us a competitive advantage in a fast-changing industry, but how we integrate them with other advanced systems like Super Cruise, our Vehicle Intelligence Platform electrical architecture and other technologies pioneered in our traditional portfolio.”

GM is doing most of the development work on these cells internally at its Chemical and Materials Systems Lab, located at the Global Technical Center in Warren, Michigan. This facility features a fabrication line with polymer mixing, slurries, a coating machine and a cell assembly room.

Next year, GM will break ground on an all-new Battery Innovation Lab and Manufacturing Technology Center to develop the next-generation Ultium battery chemistry.

GM speeds its EV rollout and pace of innovation

The modular and highly flexible qualities of the Ultium system, along with engineering advances in battery technology, the use of virtual development tools and lessons learned during the HUMMER EV development process, have enabled GM to bring EVs to market much faster than originally planned.

The development schedules for 12 vehicle programs have been moved up, including:

In addition, Buick’s EV lineup will include two Ultium-based EVs.

After the GMC HUMMER EV, the next EV to launch will be the LYRIQ, Cadillac’s first all-electric vehicle, which will arrive in the first quarter of 2022, nine months ahead of schedule.

“Ultium is already changing the way customers – and investors – view our company,” Barra said. “We are resolved as a management team to move even faster to expedite the transition to EVs. The all-electric future we are building integrates all the things we do better than anybody else – so we can put everyone in an EV, generate profitable growth and create shareholder value.”

1 GM estimated. EPA estimates not available. Vehicle range may vary based on several factors, including temperatures, terrain, battery age, and vehicle use and maintenance.

General Motors (NYSE:GM) is a global company committed to delivering safer, better and more sustainable ways for people to get around. General Motors, its subsidiaries and its joint venture entities sell vehicles under the Chevrolet, Buick, GMC, Cadillac, Holden, Baojun and Wuling brands. More information on the company and its subsidiaries, including OnStar, a global leader in vehicle safety and security services, can be found at https://www.gm.com.

Cautionary Note on Forward-Looking Statements: This press release may include “forward-looking statements” within the meaning of the U.S. federal securities laws. Forward-looking statements are any statements other than statements of historical fact. Forward-looking statements represent our current judgment about possible future events and are often identified by words such as “aim,” “anticipate,” “appears,” “approximately,” “believe,” “continue,” “could,” “designed,” “effect,” “estimate,” “evaluate,” “expect,” “forecast,” “goal,” “initiative,” “intend,” “may,” “objective,” “outlook,” “plan,” “potential,” “priorities,” “project,” “pursue,” “seek,” “should,” “target,” “when,” “will,” “would,” or the negative of any of those words or similar expressions. In making these statements, we rely upon assumptions and analysis based on our experience and perception of historical trends, current conditions and expected future developments, as well as other factors we consider appropriate under the circumstances. We believe these judgments are reasonable, but these statements are not guarantees of any future events or financial results, and our actual result may differ materially due to a variety of important factors, many of which are described in our Annual Report on Form 10-K, our subsequently filed Quarterly Reports on Form 10 Q, and our other filings with the U.S. Securities and Exchange Commission. We caution readers not to place undue reliance on forward-looking statements. Forward-looking statements speak only as of the date they are made, and we undertake no obligation to update publicly or otherwise revise any forward-looking statements, whether as a result of new information, future events or other factors that affect the subject of these statements, except where we are expressly required to do so by law. 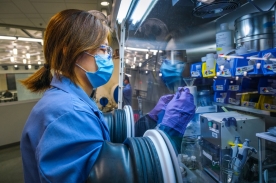 GM is doing most of the development work on its second-generation Ultium cells internally at its Chemical and Materials Systems Lab, located at the Global Technical Center in Warren, Michigan. This facility features a fabrication line with polymer mixing, slurries, a coating machine and a cell assembly room. (Photo by Steve Fecht for General Motors) 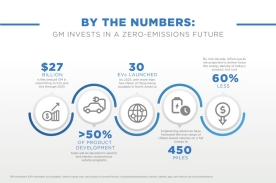 GM Invests In A Zero-Emissions Future 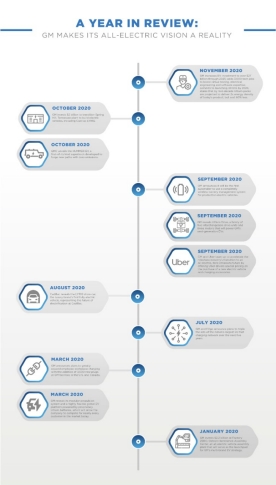